23 Apr Beaten Biscuits You Can Make At Home!

Many of you have been disappointed that we no longer have beaten biscuits available, especially here around Derby time. For as long as we can remember, Jackson Biscuit has supplied Broadbent’s with their beaten biscuits.  Unfortunately, last year they were forced to close their doors. The owners’ declining health no longer allowed them to make their delicious products. In a way, it’s a bit like curing country hams; it’s a dying culinary art form. We sure do miss those sweet folks, and their famous beaten biscuits.

If you aren’t familiar with beaten biscuits, they don’t have a lot of flavor. They take on the flavor of whatever meat you place on them, making then very tasty! 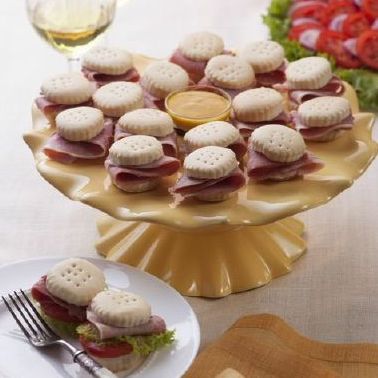 If you are ambitious in the kitchen, this recipe ( http://ow.ly/somy50qtmsb ) might provide you with those highly-coveted morsels of dough for you to stuff with Broadbent’s thinly sliced and cooked country ham, and more importantly, keep your “Kentucky Derby Party Tradition” alive.

Beer Cheese is another perfect accompaniment for beaten biscuits!  You can find an outstanding Beer Cheese Mix, along with Broadbent Cooked Country Ham and other Kentucky Derby Party selections on our website.  https://www.broadbenthams.com/Kentucky-Derby-Party-Foods/products/16/

“Originating in the 19th century, in the southern United States, Beaten Biscuits differed from their American soft-dough cousins, in that they are more akin to their predecessor; hardtack. In New England, they are called “sea biscuits”, as they were staples aboard whaling ships.”